Orange is the New Gold

On Chasing (Or Not Chasing) the Salmonfly Hatch:

Out here West of the Continental Divide, we’re lucky to have a salmonfly hatch on each of our Big Four Rivers — the Clark Fork, the Bitterroot (primarily on the East and West Forks), the Blackfoot, and Rock Creek. In some places, the hatch is fairly localized (upper Clark) and in others, it’s fairly dense and river wide (Rock Creek, for instance, where stoneflies hatch by the pound).

Regardless of river, the big orange bug is chased frenetically by anglers around Missoula, and for good reason: some of the year’s biggest fish fall prey to hummingbird-sized imitations. Sometimes the biomass of hatching insects is mind-boggling; sometimes the fish will eat a Cheeto tied to a hook; sometimes the fish get so gorged they take naps like the ones your uncle used to take after a Turkey Day Dinner, when he’d unbuckle his belt and lie down on the couch. Here are some tips to catching the best fishing this dynamic hatch has to offer.

Nymph Ahead of the Hatch

Some of the best fishing during the salmon fly hatch can be found before the bugs actually hatch, when the nymphs are migrating from mid-river boulders to the shallows. Just before they crawl out onto the willows, these three-inch long nymphs will draw big trout to the shallows; concentrating one’s efforts five or ten miles above where the bugs have already drawn surface attention from the fish is a cagey veteran move. Get your 10lb Maxima out, and a couple of Yuk Bugs, and hit what Bill Dance called “the willers” — the big boys are there putting on post-run off pounds.

The Salmonfly is a big bug, #2-6, and trout, even in fast moving, stained water, can get a bit jaded on imitations. Guides call it the “salmonfly sniff” — when fish come up to a large orange bug but don’t quite open their mouths. Low-riding salmonflies can help the cause, but sometimes going to a golden stone imitation — even when they’re not on the water — is better move. The golden is less of a mouthful, and often fish seem to come to it with a bit more confidence.

When the hoards of anglers are headed up Rock Creek or the Blackfoot, the salmonfly hatch often seems like “an event” — one of our favorite moves this time of year is to avoid the hatch altogether and fish a stretch of river where a less glamorous bug is emerging. It’s a great way to find some solitude during what’s often a carnival of boat traffic — and thus, we’re afraid we can’t be too specific. Just remember: trout live and eat across the river-systems, not just where salmonflies abound. 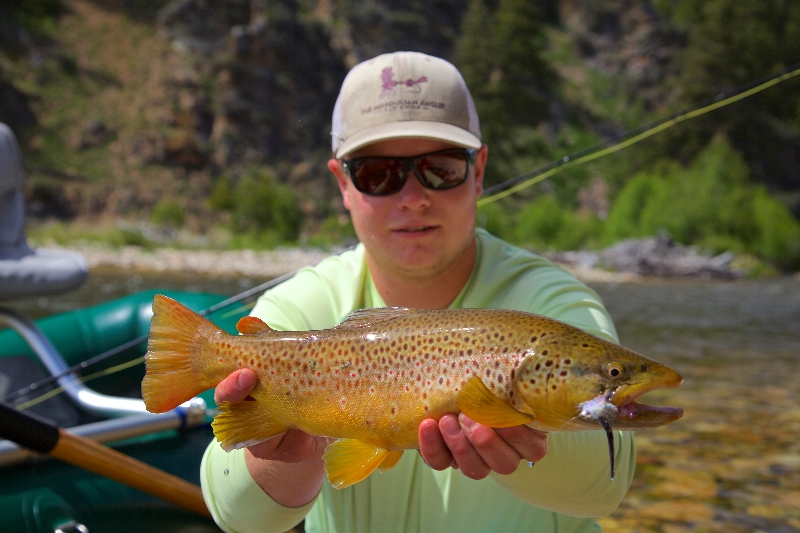