Chocolate soup, soup, and more soup–that’s our Montana run-off State Meal for the next few weeks. In large part, our great state’s rivers have taken on the color of Thanksgiving gravy, and won’t likely clear until late June. Our snowpack remains ample, but the lack of rain in the past two weeks has many drainages hovering just above average, in terms of moisture content.

As for when the rivers will clear? Head down to Charlie’s and buy a drink for the guides at the bar–if there are seven oarsmen there, you’ll get seven different answers. Only Mother Nature holds the crystal ball. My guess is that our Missoula rivers will begin to fish with big dries by the third week of June–Rock Creek, of course, will fish a tad earlier than that–but a look at the Big Three today would leave any better skeptical.

How does this big water bode for the season? I’m thinking back to 2011 when the golden stones came off the Bitterroot in drones until early August, and hopper fishing quickly followed suit. If you study your old Gary LaFontaine books, you’ll find his description of a perfect hopper year closely resembles the season we’re lining up for thus far. In general, when a big runoff subsides, we’re in store for a long spate of ample hatches and epic dry fly fishing once things clear. Big, clear water makes for happy trout.

For now, though, there’s still plenty of fun to be had on the Missouri and on the lakes. The big Missouri rainbows are falling back into the river post-spawn and will eat just about any well-drifted scud pattern you feed them. And, like whales eating krill, they have to eat a lot of food to stay fat. 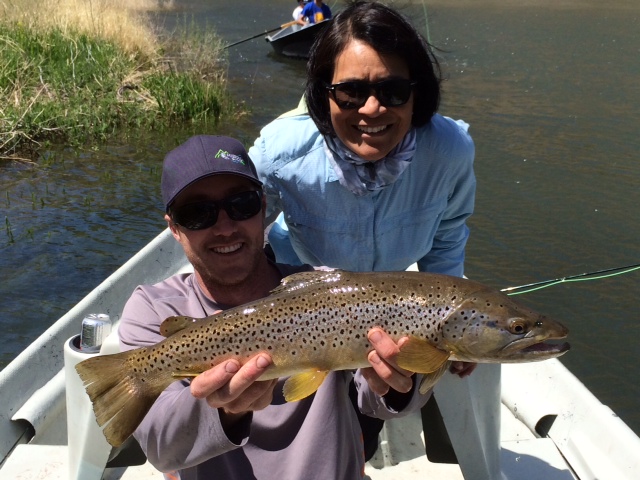