If you thought fishing had started to die off as October’s nights grew colder, think again. Our fall fishing in Missoula has been nothing short of outstanding, a brilliant cap on a fantastic year. And frankly we’re just getting to the good stuff…

Sparse hatches of blue wings, mahoganies, and October caddis have played significant roles in the angler’s world, but the biggest player has been the Trico. That’s right. On sunny days after cold nights, spinner falls as late as 1pm have triggered epic feeding binges on the Bitterroot and the Clark Fork. Yesterday, on an afternoon half-day trip, one of our guides reported putting his boat in and taking it out at the same Bitterroot access. His clients fished to literally thousands of rising fish in a half-mile stretch of water, and caught some dandies.

Go light, go long, and fish a fly you can see. If you can’t see your bug, you can’t know if it’s dragging–and fish eating spent bugs like Tricos won’t touch a drift that drags. Some anglers like to fish two flies — an attractor of sorts and very subtle realistic Trico off the back — and others like to fish one single fly on a 12 foot leader. Either way, the angler who makes his first presentation his best presentation will fare the best on these fish. And, whether you use 5x, 6x, Flourocarbon, Monofilament, or Cat Gut, you’d better lead with your fly, not your leader and line. Remember, lots of fish are podded up this time of year, which is fun to see but also requires more stealth. Think of trying to sneak up on thirty mallards as opposed to three–lots of eyes on you.

The best thing about this late season report is that there’s still more great fishing to come. We have another week, according to the weather reports, of unseasonably warm days, during which we’ll probably see more great Trico fishing and a smattering of larger mayflies. But, when the weather gets nasty, the fishing should get even better on late fall bugs such as BWOs and Mahoganies, two mays that prefer nasty weather for hatching.

Get out now, so you’ll know where the pods are when the light gets low!

We’ve also begun to see some big fish get taken on streamers as the brown trout start to move through the system. Drab colors such as light olive and brown have been moving the most fish. Also, the crawdads are big in the riversystems right now, so don’t be afraid to tie on something jumbo.

On calm days, the number of rising fish will make you wonder if there’s a better freestone in the West for targeting surface feeding trout.

Back to its glory days in and just down from town. Tough to beat in the clouds. 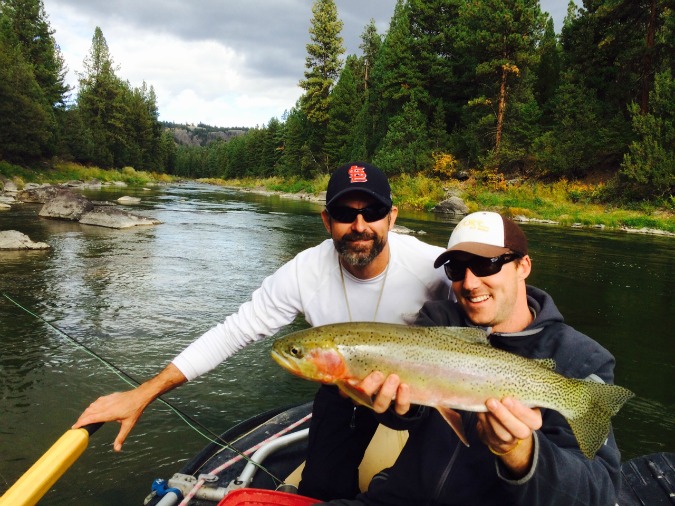 Still giving up some awesome fish on droppers and streamers.