Hoppers, Hecubas, and Rounding It Out

In late August, I was talking to one of our veteran guides–this year is his 17th behind the oars–and he said he thought that 2014 has been the best fishing season in the past fifteen. When gauging the opening of this month with the past four, it’s hard to argue with him. Each of the past two months we’ve had a “rescue rain” that has boosted flows and cooled water temps, keeping trout happy and anglers free from the doldrums that often set in late in the season. Most recently, our late August rain has put some extra water on those slow hopper banks where the big ones hide, and triggered the first of the fall mayflies–the hecuba and the overlooked big sulfur.

Come join us, cause we’re in for a fantastic final leg of the fishing season. Now for the hopper report!

Most of our natural hoppers are running about a size 10, but don’t hesitate to toss a jumbo-tron around. There are tons of midnight stoneflies around and big fish will key on these until Halloween. Vary your color, size and retrieve until you dial it in. Every day is different. One day the fish may be piled in the middle of the river, and the next they might be tight to the banks. Often this has to do with wind. If there’s a little wind-cover, the fish feel more comfortable in the shallows. Yes: wind is good this time of year. Finally, foam bugs rule the roost around Missoula, but don’t hesitate to try a more natural bug. I pulled a #12 parachute hopper from the bottom of a box the other day and tied it on for a client who said he hated “fishing that foam crap”–big Clark Fork fish sipped the bug all day long. Whether they were eating it for a big mayfly or a small hopper I don’t know–but they ate it with assurance. 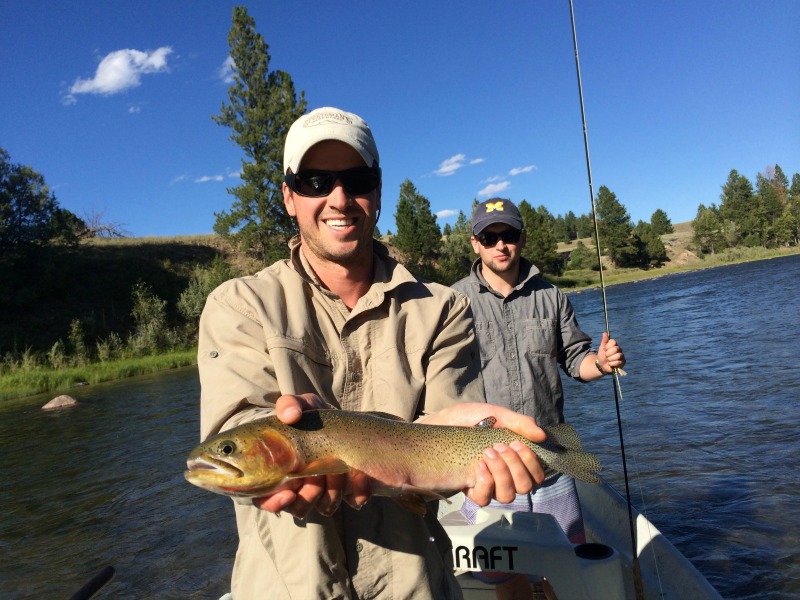 Wanna put a straight face on your fishing buddy? Catch a few of these in front of him…….

Tricos have been pretty much non-existent, but big fish have been looking for small drab colored nymphs. Caddis cases? Drowned ants? The big Bull Trout are on the attack–we had three Shark Week moments in one float the other day. Not a good day to be a struggling 10″ cutt. Remember, Fall will snap quick up here. I’ve already seen some October caddis shucks on the rocks of the tributary streams while out scouting for elk. Also, if you’re behind a couple of boats slinging the standard rig–Chubby and dropper–try swapping out for a small hopper on a real long leader. Good drifts are hard to come by up here right now, and sometimes an extra foot of tippet makes a difference.

Enough Trico sippers in the morning to keep you busy, then afternoons of hoppers and big mayflies. Sunny days have brought out flying ants–watch out for this masking hatch. Cloudy days will tease out Hecubas and sulfurs. Windy days have produced some fantastic hopper fishing. It’s been fun to watch the investigatory takes of two weeks ago turn into full on munching. Twitch or die! Good days on the Clark. 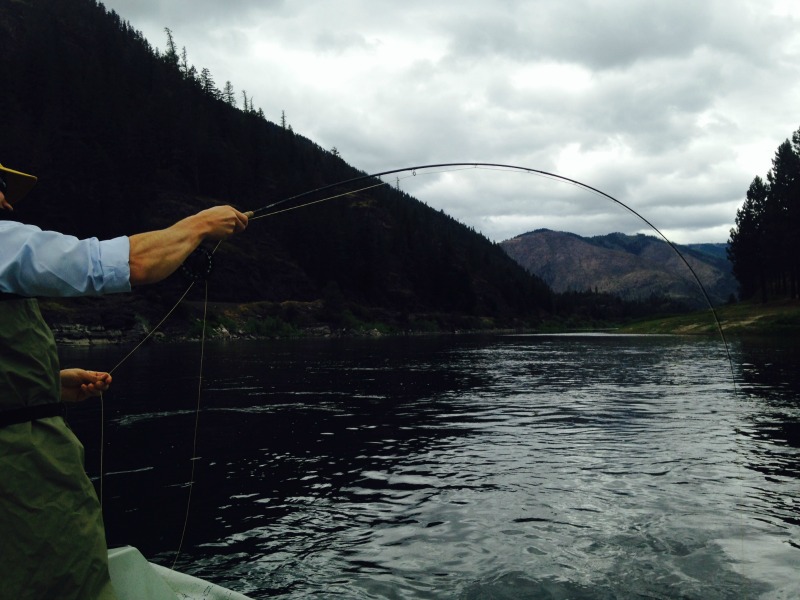 Keep that rod tip high! Tough to do on the Clark Fork River’s big shouldered trout.

You want to be here when it turns. It’s still been hit and miss up here on dries (dropper kings, you know who you are!) but the weather coming this week should flip the switch for good. I wouldn’t be surprised to see a Mahogany by the end of the week. This river will see some big fish taken SOON!