Keep it simple, stupid, my old basketball coach used to say. The Missoula Fishing Report is an easy one to write this week: Fishing has been good to really good–sometimes even great. Our water everywhere’s been on the drop, and the fish and bugs have been happy with these conditions, coupled with consistent water temps. Lots of Skwallas, March Browns, and Blue Wings can be found on both the Bitteroot and Clark Fork, and even the Blackfoot offers rising fish sipping small bugs. The water’s still big enough that boats are spread out, and no one seems too grumpy with company, as occasionally happens this time of year. The weather forecast looks ideal for another week of stability and goodness–so if you’re on the fence, hop off, and come see us in Missoula.

The bugs mentioned above, as well as midges, have been getting fish up from 11-5 each day. It’s nice to have a longer window of opportunity than, say, a week ago. You can catch some nice fish before and after that, of course, but you’ll get your work done midday. As the water drops, keep shifting your approach to find preferred habitat. Hint: they’renot necessarily WHERE you found them last week, but in the kind of water you found them in. 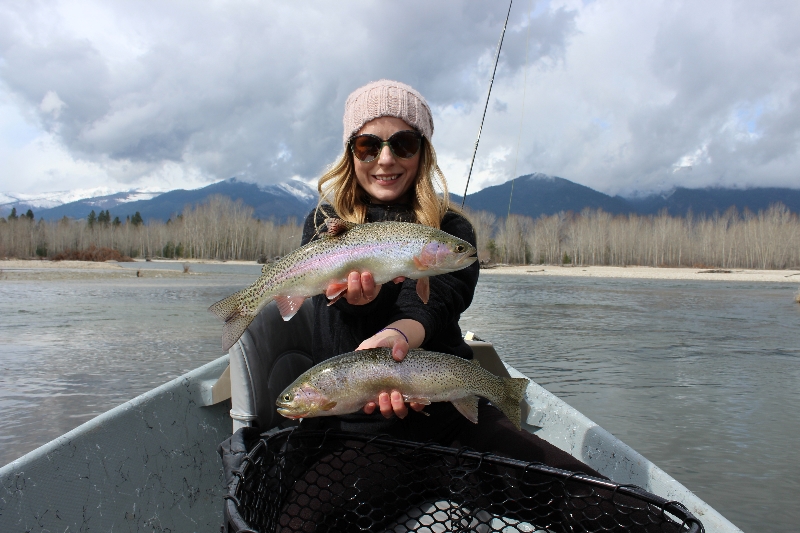 Good hatches of BWOs and straggler skwallas, as well as some March Browns have brought fish to the surface daily close to town. Godfather of Missoula Dry Fly Fishing John Perry’s #12 Bugmeister is a great fly this time of year, especially when there are still some nemouras around, along with the skwallas. On the twitch, Fred! 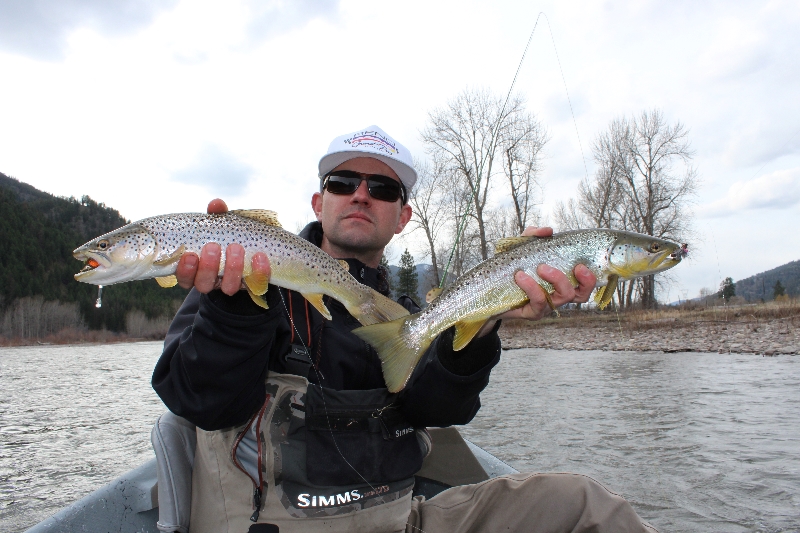 Not a ton of fish, but big fish are moving up here, both to streamers on the strip, and slop rigs on the drag. Of course they’ll eat the bacon, but if you’re up here just switching worm colors looking for the magic bite, you’re probably missing some fun. Yes, some dry fly fishing in the soft water and eddies, but nothing epic. Yet. It’s going to be an amazing caddis year up here!

Most of the good ones are iced off and the fish have started to move into the shallows — if you can see them, they’re probably going to be hard to catch, but cast just beyond the visible fish and crawl a small leech for the big ones. It’s a fun tug!