It’s hard to guess where the river flows will go in the next week or so, but the slight dusting of snow on Mount Jumbo this morning has me betting that we’ll get another good window of fishing before the plug gets pulled for good. Nearly all the gauges are trending down after the last two cold nights, and the ten-day forecast, with overnight lows in near freezing, hints at more of the same.

All of this points to the fact that we’re probably two weeks behind on spring, hatches included. As the Skwalas wane, we’ve seen some good Baetis pushes, and a smattering of March Browns, but the big mayfly hatches–like the #10 Gray Drakes that wake every big fish in the river regardless of flow–are yet to come. If the flows hold and the weather stays cloudy, the weekend and early next week could swing.

For today, if you know where the springs are, you can find some very big and willing fish on the dropping Bitterroot.

Otherwise, it’s the Missouri with sow-bugs and small mayfly nymphs, on a fairly long leash–not to mention a healthy dose of courtesy for the other boats on the water.

Upper Rock Creek is holding steady, too, and the angler willing to brave the elements could make hay with a stonefly nymph and a pink worm. Or sleep in, wish they still served Breakfast Thingies at Rattlesnake Trading Company, and get on the water near 2 when the fish start looking up for stones and small mayflies. 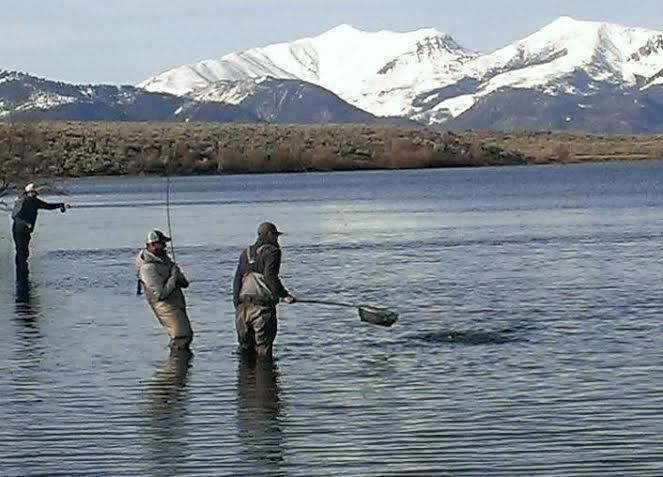 Also, don’t forget the lakes, which are nearly all iced-off. It’s a great time of year to walk the shoreline and watch for pre-spawn cruisers. Toss a leech in front of one of these big boys and crawl it as slowly as you can across the bottom–just like bone-fishing, give or take 40 degrees in air temp.