Regarding dropper fishing, one of our old mentors is fond of saying, “It detracts, Fred!” And during certain times of the year, we’d have to agree. Your fly gets a much longer, cleaner drift–into fishier places–when it doesn’t have a 3ft dropper hanging from the bend of its hook. Not that we won’t sneak some droppers on now and then, but from end of July through October, the longer the dry fly drift, the bigger the fish.

Overall, the midsummer fishing on the Blackfoot, the Clark Fork, and the Bitterroot has been very good to stellar, depending on the day (read: weather). One word describes the quality of our fish this July: SOLID. Okay, two words: REALLY SOLID. 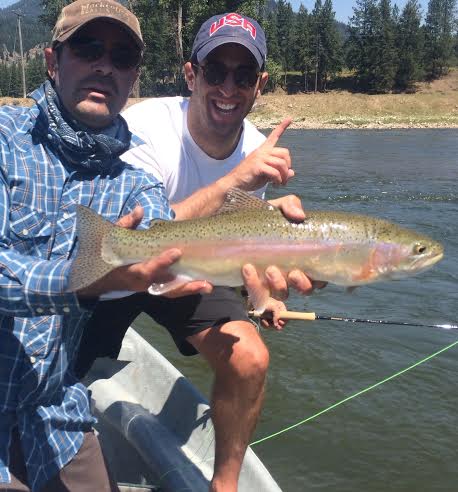 Porter thought he had the fish of the trip….. 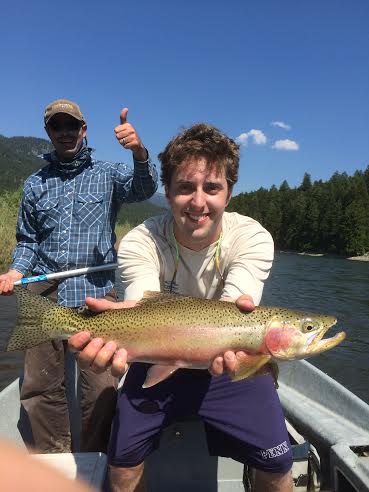 Until his brother Armin trumped him!

Nocturnal stones have started in full force, making for fantastic morning fishing on the Clark Fork. If the clouds or fire haze appear, the strong fishing continues all day in the flat runs. Regardless of weather, the riffles are producing big fish all day long. PMDs are lingering, and on the cloudy mornings there have been risers till noon or so. Also, there’s a good run of caddis each evening, but the daytime fishing is so good as to warrant nighttime celebration, not a second float. Hoppers are around the corner. If you’re floating on a windy afternoon, don’t hesitate to throw on a small Taylor’s Fat Albert–TWITCH IT!

Mark and David from the UK prefer to make it a double. Cheers mate!

The Root has been giving up some fantastic fish on cloudy days on some of the less popular floats–again, faith in the single dry has paid off. There are still PMDs–good spinner falls–and a smattering of stones creating good rises throughout the day, and the traffic has thinned up here as well. Expect the West Fork to come into its mid season glory during the next two weeks.

There are still some salmonflies bouncing around the Box Canyon, but rest assured the fish aren’t on them very much. Something a bit smaller than a salmonfly but equally leggy has been the ticket. Experiment with color until you get them dialed. Every day is different. Read LaFontaine’s “Color Attraction Theory” if you’re interested in geeking out on this stuff. It takes some cojones to float a single dry fly down the heaviest foam lines in the river when everyone else is throwing a puffy chubby and dropper, but the rewards have made the risk worth it. 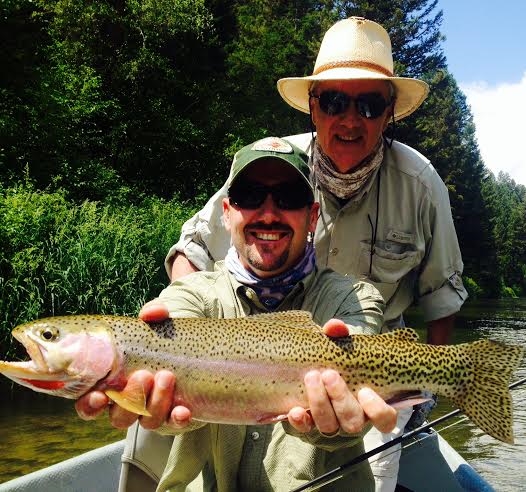 A big box canyon cutbow on the twitch….

One Comment to "Fishing Report: Cut the Dropper – Catch a Whopper"