The Anatomy of a Missoula Fishing Season

A complete Guide to a Season of Fly Fishing in Missoula

Writing Missoula Fishing Reports in 2014 was an enjoyable but challenging endeavor. Just when we’d have a new report ready to post on, say, how fishing was about to get tough due to exceedingly warm days, a three-day rain would arrive to recharge the rivers with oxygenated goodness. The world of rivers and trout is an unpredictable one, so the reader should take all 2015 predictions with a grain of salt.

For now, we’re at at 100% snowpack, which bodes well for the summer–but what does that mean? In our experience, snowpack is important, but how it “runs off” holds much more sway with the fish. Last year, for instance, we were over 100% snowpack, but a very dry May had us looking at possible drought–until it rained three weeks straight in June, and led us into a storybook year. We’re expecting a similar season this year. In the last warm week, we saw plenty of rising fish on the Bitterroot–if you’d have predicted as much a month ago, we would have called you crazy. Here’s an overview of a year of fishing in Missoula and a “Year in Preview” for 2015:

Fly Fishing Missoula in the Spring

Just about the time college basketball fans start filling out their brackets, we usually see the first legitimate skwala stonefly emergence on the Bitterroot and lower Clark Fork rivers. Midges and tiny winter stoneflies make up the bulk of hatches this time of year, but a pork-chop skwala (a solid #10) drifting down a slow bubble line rarely gets ignored. Some of our most die-hard clients enlist our services this time of year, and it’s as likely a time as any to snag a dry-fly eating brown trout pushing 22.” 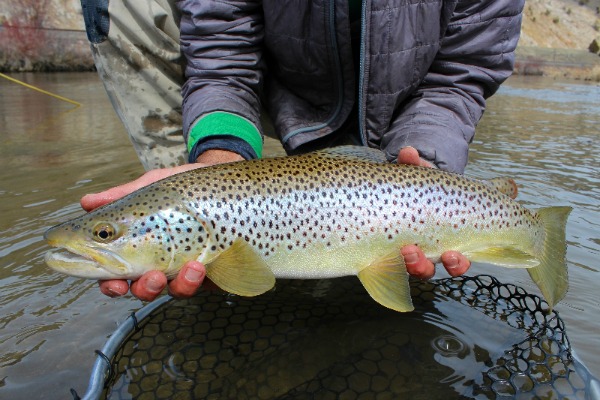 By April Fool’s Day the skwala hatch thickens, and mayflies such as BWOs, March Browns, and Gray Drakes emerge to pleasantly complicate things on the ‘Root and Clark Fork. Some of our best dry-fly days of the year occur in this window—the fully rejuvenated lower Clark Fork confirmed it was back in its prime this time last year. A slowly stripped olive streamer can also be deadly, as can a small drab soft-hackle that mimics emerging March Brown nymphs.  The Blackfoot is usually waking up about now, too, and those huge bottom-dwelling  trout can be suckers for a dead-drifted bunny pattern, and even—ugh—a San Juan worm.

As the air and water temperatures begin to creep up, we experience slight bumps in water flow as low elevation snowmelt falls into the rivers. This is the time of year when our guides spend all off hours at the computer (not at Charlie B’s!) checking streamflows on the USGS site, trying to predict if and when their favorite stretch might become unfishable for a day or two.  Dropping after a two-day April spike, the Bitteroot or Clark Fork can be good enough to spoil you for a season, the hungry fish that much hungrier after missing some feeds. 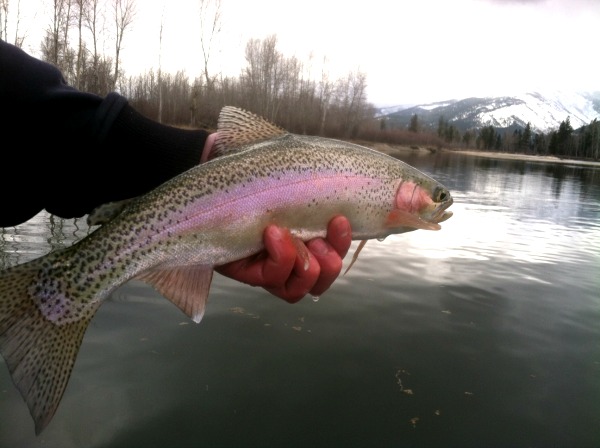 If we do encounter unfishable stretches, like a good neighbor, the Missouri is always there, always, just a short hop over Rogers Pass. This river comes into its own as the rainbows return from the feeder creeks of their spawning migration. Fishing the Missouri in late April can numb both your fingers and your mind—in the best of ways! Sometimes it’s just hard to fathom that YET ANOTHER fat 18-20” rainbow has come to the net. Mostly, we’re nymphing with scuds and sowbugs under an indicator this time of year on the Mo, but the occasional midge hatch brings pods of fish to the surface as well.

Early to late May offers continued bounty on the Missouri, with dry fly opportunities becoming more abundant. Streamers will produce great fishing as well on cloudy days. Some of our smaller, barely floatable streams will come into their prime as well, but they’re about as mentionable as a good morel picking spot!  Our Missoula area rivers will offer AMAZING but hard to predict windows of caddis and stonefly action between pulses of low-elevation melt. 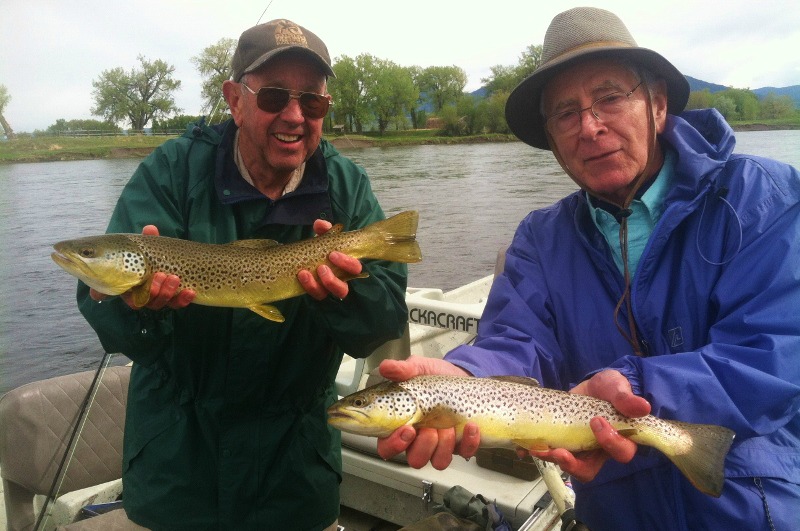 Most of our high country snow melts in May and Early June:

During runoff we still have plenty of options.  On an ideal water year such as last year, the Missouri will remain fishable right up until the salmonflies start to emerge on Rock Creek. On a less than ideal year, we’ll spend our days tying flies and fishing high mountain lakes and spring creeks. Either way, by early June the waters on the West side of the state are dropping, and we have big bugs and options galore—the upper Bitterroot and West Fork of the ‘Root; the Blackfoot, and the upper end of Rock Creek. Georgetown Lake is also a favorite of some folks this time of year, because the huge post-spawn rainbows that cruise the shallows and offer great sight-fishing. Murky water also provides a fine time to drown huge streamers for the fish of the year on the Blackfoot—a big tug on a tight line this time of year will ruin you for good long while.

Fly Fishing Missoula in the Summer

By the time our rivers are on the collective drop, there isn’t a destination with more fishing variety in the country than Missoula.  The fast reaches of the upper Bitterroot and West Fork are still swinging with thick stonefly and Green Drake hatches. The lower Root and middle Clark Fork have PMD sippers and fish that will whomp the right leggy, home-brewed stonefly pattern. The lower Clark Fork and Blackfoot are in their glory with a combination of slow-bank feeders and riffle fish that will pound foam flies and droppers. Evening fishing around Missoula offers an hour or two each night of half-lit chaos. To say nothing of the smaller higher-elevation streams, such as the North Fork of the Blackfoot, which are just coming into their own as water temps start to rise. 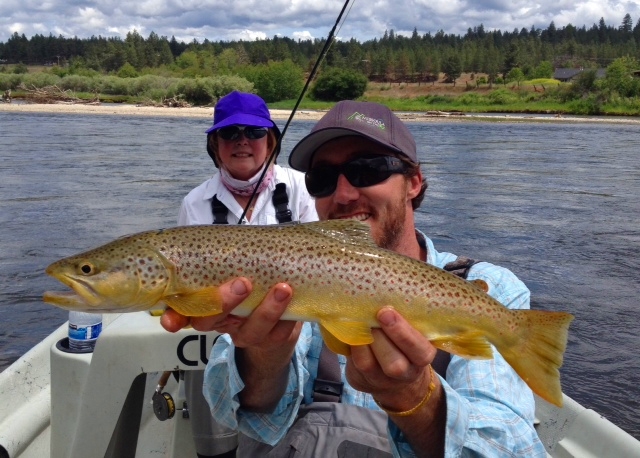 This is the time of year when guides get sneaky again. They might tell you what stretch of river they’ve been having good fishing on, but they certainly won’t tell you what color dropper they’re using, or how far they’re hanging it below their indicator fly. The fish have begun to concentrate on fast, oxygenated stretches of water, and shady stretches of river. We like the dawn assault this time of year, even if our wives and girlfriends don’t. All of our area rivers will give it up on dry flies before the paperboy strikes in late July and August. Middays find fish stacked in the riffles, easy pickings on the right dropper or tiny terrestrial. 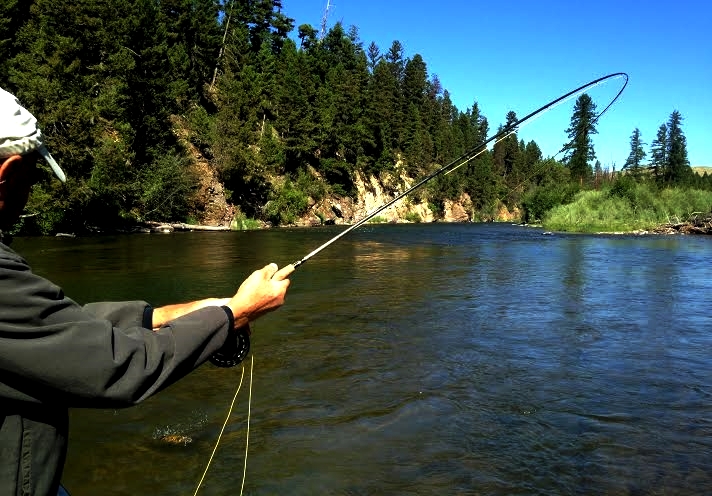 Our Trico hatch seems to begin later each year. It used to be dependable by early August, but the past few seasons have given up decent PMD spinner fishing on early August mornings, but not much in the way of the tiny “White and Black” until late in the month. Thank goodness the Spruce Moth has appeared to fill in the void. If you haven’t fished The Moth Event, it’s worth thinking about booking a trip for the last week of July / first week of August. All of our rivers and their forks see a smattering of this early morning bug, but the Blackfoot fishes at its prime on this “event” (it’s not a hatch because the bugs fall out of the trees), with rising fish targeting small blonde moths for three hours each day.

Fly Fishing Missoula in the Fall 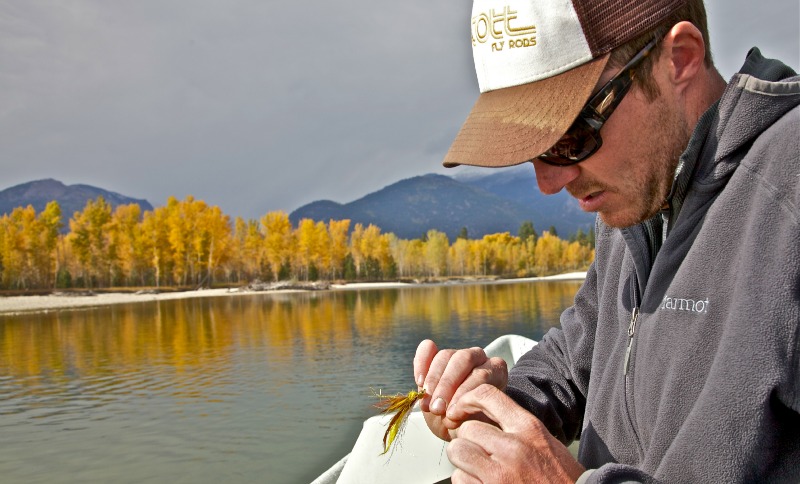 By late August, Tricos and hoppers have made the Clark Fork and the Bitterroot the places to be again.  If you like to spot pods (6-12 fish) of slab rainbows sipping mayflies half the size of mosquitos in a foot of water, you’ll want to spend some time on the ‘Root and the Clark in August. Hopper fishing is the way to spend the afternoons—get that big bug downstream from the boat, fly first, and keep your eyes peeled. Some of the biggest fish of the year barely break the surface when they take a hopper. And then again, some WHALE IT!

By the time the nights start cooling and the elk start bugling, mayflies start to dominate the fish and angler’s mind. True, we’ll still have some fine hopper and flying ant days in September, and some fun October Caddis fishing, the bulk of our fishing this time of year entails chasing hatches of Hecuba (late fall drake), Mahoganies, and BWO’s. If the fall is warm, like this passed year, our Trico hatch will last through the first week of October. It’s not uncommon to see one of our boats’ rod racks filled with options—a rod for sippers, a dry-dropper rig, a hopper or caddis rod, and a streamer stick loaded for big pre-spawn brown trout.

Along with March, April, May, June, July, August, and early September, it’s our favorite time of year to fish!

We look forward to fishing with you this season!